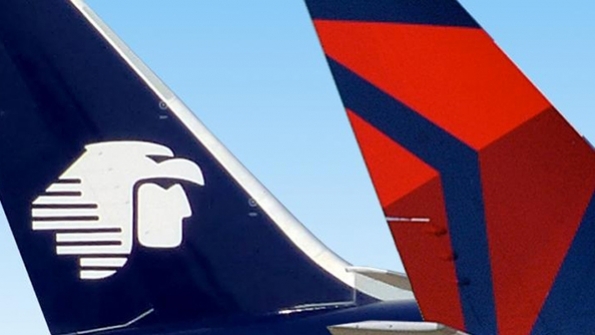 Although friendly for many years now, Delta and Aeromexico recently announced coordinated pricing, schedules, operations, and efficiencies. This should, according to the carries, counter their competition and service added destinations. They will also work together on improving the customer experience by investing in airport facilities, lounges, and boarding areas, as well as behind the scenes areas like marketing & sales.

Delta, United, and American now control about 2/3 of the US – Mexico cross-border flights – this is before the official legislation on the Delta / Aeromexico deal. Delta owns 36% of Aeromexico with options to purchase another 13% for a total of 49%.

The JV will utilize the hubs of both carriers to provide passengers flying between the US and Mexico connecting options. Delta has hubs in Atlanta, Detroit, Los Angeles, Minneapolis-St. Paul, New York (both LaGuardia and JFK), Salt Lake City and Seattle. Aeromexico has hubs in Mexico City, Monterrey and Guadalajara.

Aeromexico is listed as a Tier 1 partner, along with Air France & KLM, so we should expect similar MQM and mileage accruals.

Aeromexico operates over 600 daily flights, and its network includes 44 destinations in Mexico, 19 in the United States, 15 in Latin America, 4 in Canada, 4 in Europe and 3 in Asia.

Effective May 8, 2017, Medallion Members will receive additional benefits when traveling with Aeromexico, as a part of Delta and Aeromexico’s growing partnership.