Have there been previous groundings of planes in the US?

There have been two major groundings of planes by the FAA (Federal Aviation Administration) in the US, not including the current 737 MAX situation. These groundings were for an entire model range, not a subset of an aircraft model. The most recent one, and one that many people are familiar with, was for the Boeing 787 Dreamliner in 2013. The other model-wide grounding occurred in 1979, when the US banned the DC-10 after a horrific crash in 1979.

The Boeing 787 Dreamliner was an all-new aircraft design, first flying in 2009 and starting commercial service in 2011 with ANA Airways. There are nearly 1,500 orders as of early 2019 with more than half having been delivered. Although problems are common in the first year of a new aircraft’s life, after a number of incidents, including an electrical fire aboard an ANA 787 and a similar fire found on a JAL 787 at Boston’s Logan Airport, the FAA ordered a review into the design and manufacture of the Dreamliner. This was quickly followed with a full grounding of the entire 787 fleet.

Only two US airlines, United Airlines and American Airlines, operated the Dreamliner in 2013. Chile’s Directorate General of Civil Aviation grounded LAN Airlines’ three 787s. The Indian Directorate General of Civil Aviation directed Air India to ground its six Dreamliners. The Japanese Transport Ministry made the ANA and JAL groundings official in Japan and indefinite following the FAA’s announcement. The European Aviation Safety Agency also followed the FAA’s advice and grounded the only two European 787s, which were operated by LOT Polish Airlines. Qatar Airways announced it was grounding its five Dreamliners. Ethiopian Air was the final operator to announce groundings of its four 787 aircraft.

After it completed an investigation of the electrical and battery issues on the Dreamliner, the NTSB released a report in late 2014, which assigned blame to several groups:

The battery incidents were considered thermal runaways (similar to overheating), were not contained in a safe manner, and happened much sooner than Boeing & parts suppliers had estimated. There was a significant chance of these incidents happening again or causing even worse damage (the JAL 787 battery caught fire on the ground; obviously could’ve been a much worse outcome had it happened in the air). By April 2013, the FAA allowed Dreamliners to return to service, once Boeing equipped them with upgraded battery and fire protection systems.

Reports estimate the cost of the grounding to be around $110M for ANA and JAL combined, which operated about half of the 50 Dreamliners in 2013. Overall, the groundings expected to cost Boeing approximately $600M. This total comes from the carriers expecting reimbursement of their losses from Boeing, as well as Boeing halting production of the 787 while the investigation moved forward.

In the 1970s, Boeing dominated international long-haul travel with it’s wide-body 747. Competitors McDonnell Douglas and Lockheed Martin scrambled for a plane that could fly almost as far but was cheaper to operate. It was to be used on domestic transcontinental and transatlantic routes. Both companies came out with very similar models, dubbed the tri-jets (due to their three engines). These planes were everywhere in the late 1970s and early 1980s but disappeared from commercial aviation somewhat quickly.

While Lockheed’s tri-jet, the L1011 TriStar, didn’t achieve much volume in sales, the DC-10 was selling decently but was plagued with design problems. First, a flaw in the cargo doors caused them to blow out in flight, resulting in rapid decompression and sometimes crashes (American Airlines Flight 96 in 1972 and Turkish Airlines Flight 981 in 1974). Second, the DC-10 was involved in some bad publicity that was indirectly associated with the manufacturers design. In 1973, National Airlines flight 73 had an engine failure, blowing out a window and killing a passenger. In 1978, Continental Flight 603 had a tire issue on takeoff, causing a massive fire which killed two passengers. In 1979, Western Airlines Flight 2605 landed on the wrong runway in Mexico City, killing almost all on board.

In 1979, American Airlines Flight 191 crashed in Chicago after an engine separated from the wing on takeoff. The wing ripping off caused the hydraulic lines and their backups to be severed, which all ran together in the same part of the wing, a result of poor design. 273 people were killed, making this the deadliest crash in US history. Perhaps because this happened in daylight and in view of many people both at the airport and on the ground nearby, and because a photographer caught the plane on fire seconds before hitting the ground, this was one of the first crashes to be extensively covered by the media. The horrific reports and photos spread quickly throughout the public and was essentially a nail in the coffin for the DC-10 in the minds of the public. 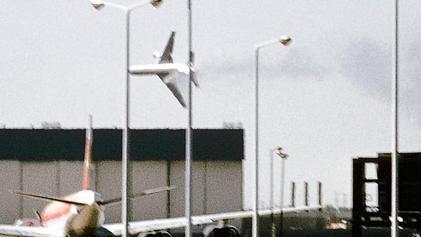 The FAA grounded all DC-10s, 138 of which were operated by US airlines. McDonnell Douglas quickly implemented changes to the hydraulic system and safety controls, and the planes were returned to service five weeks later. The full investigation found that improper maintenance led to the engine separating, but that design flaws prohibited pilots from maintaining flight control. When the DC-10 returned to service, its reputation never recovered. At the end of 1979, Air New Zealand Flight 901 crashed in Antarctica as result of poor flight planning and severe weather conditions. In 1982, World Airways Flight 30 didn’t stop in time on the runway in Boston and crashed into the harbor. There were numerous other crashes of DC-10 aircraft throughout the 1980’s, but the decade ended with the crash of United Flight 232, which crashed after an engine exploded and blew out hydraulic lines, making the aircraft uncontrollable. Although some survived the crash, 111 died. There was a very public investigation, and by the 1990s the DC-10, was relegated to mainly cargo flights.

The costs of the recent grounding of the 737 MAX

Analysts estimate that a 2-month grounding of the MAX would cost Boeing approximately $5B. These costs would initially come from reimbursing airlines for lost revenue as well as halting production and delivery of new planes. Other costs of grounding the plane would come from plane parking and airport fees, idle crews, and rescheduling factory work and supplier deliveries.