The Airbus A220 is the newest regional jet to be introduced to the commercial market. The 100-160 seat plane was introduced in 2016 with launch customer Swiss Air, but Delta is the first US airline to purchase it. I had the opportunity to fly the maiden flight on Delta’s A220-100 in February 2019.

Previously launched as the Bombardier CS-Series, Airbus purchased the program from the Canadian manufacturer, and renamed the jets A220. There are -100 and -300 iterations, and Delta has ordered 90 planes, between the two models. These short to medium range jets are meant as a more modern and efficient replacement for an airline’s older A319, 737 Classic, and Embraer models. In addition to the latest technology and composite materials available, they feature a wider cabin than most regional jets, larger windows, and more overhead bin space. Airbus claims an overall 15% lower seat-mile cost, 20% lower fuel burn, a 25% reduction in maintenance costs, as well as a four-fold reduction in the noise level compared to existing competing aircraft.

Delta’s inaugural Airbus A220 flight was on February 7th, flying from Laguardia (LGA) to Boston (BOS). An hour later, another Delta A220 would kick off the LGA to Dallas (DFW) route. These first flights had been moved back a week or so due to the government shutdown affecting FAA certification paperwork.

The day before the inaugural flight, I received an email invite to join the “First Flyers Club” from Delta. It didn’t offer a lot of details but invited me to arrive early for a brief introduction and celebration of the new aircraft. I was planning to do this anyway, since I had read other people’s reviews when they flew on a new aircraft, but was excited nonetheless that Delta was promoting the event. 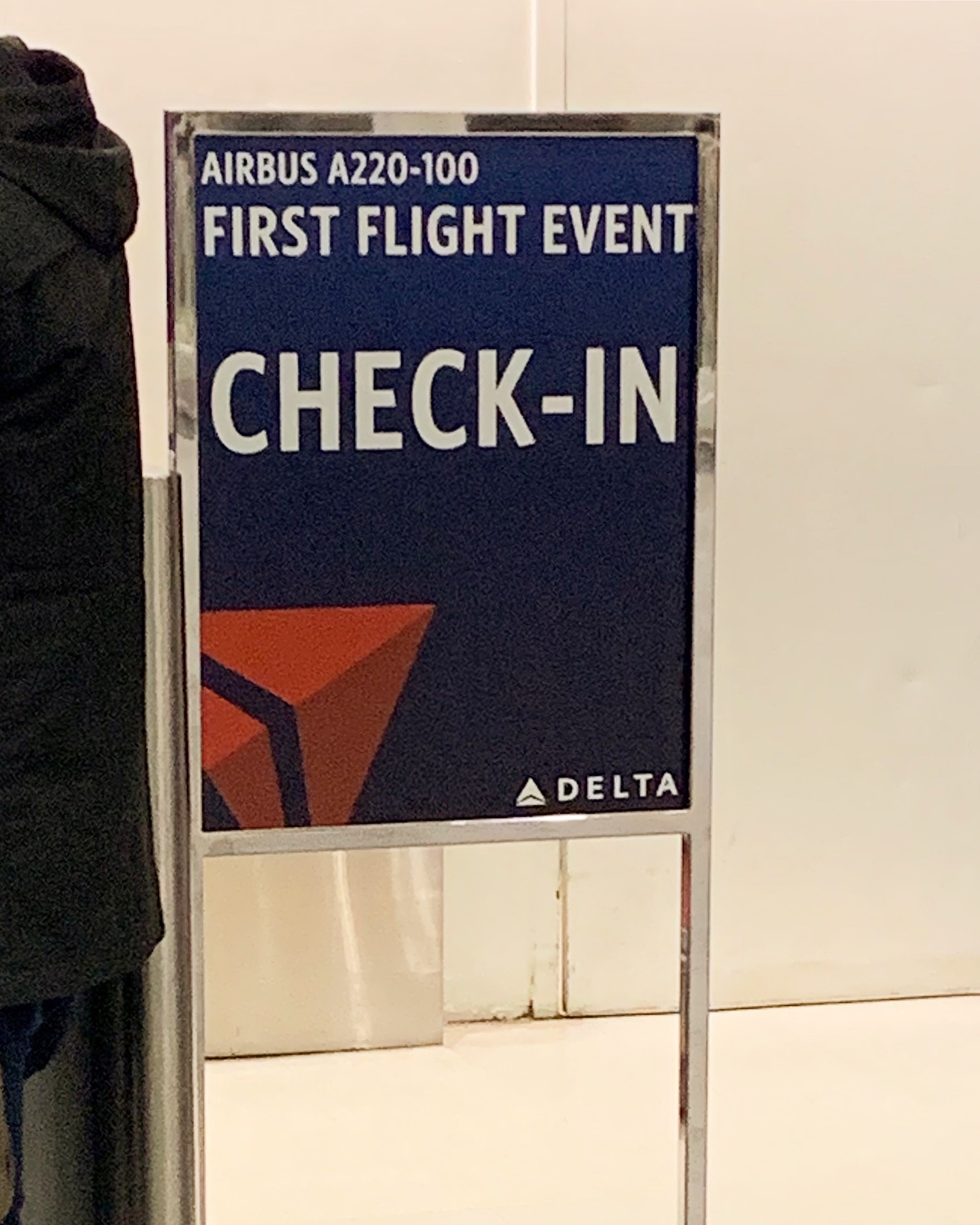 When I arrived at LGA at 430am, a little more than an hour before departure, the security lines and most of the airport were empty. Walking to the gate, there was a lot going on – breakfast was being set up, and there was a podium and step and repeat near the boarding desk. Amidst the Delta and LGA executives, the passengers seemed to be about 90% aviation enthusiasts here for the inaugural flight. The remaining passengers looked like they needed to get to Boston and were surprised/confused by the celebration. 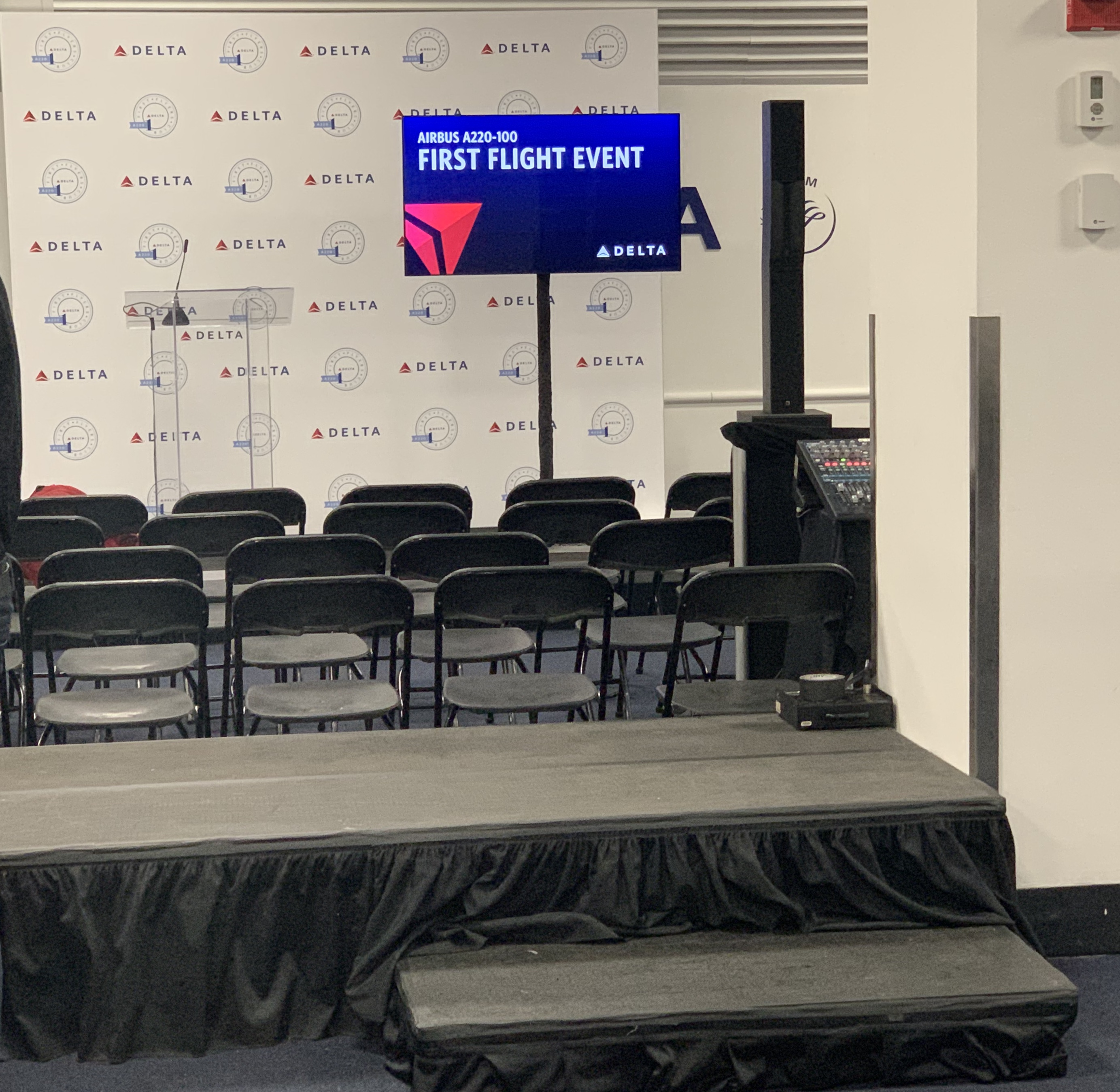 Right before boarding, two guest speakers talked about the plane and equipment, and there were photos with the crew and pilots. Delta employees were handing out swag and it seemed everyone was really excited about the new plane. Once we boarded, there were placards and flight pins on every seat, which was a nice touch. 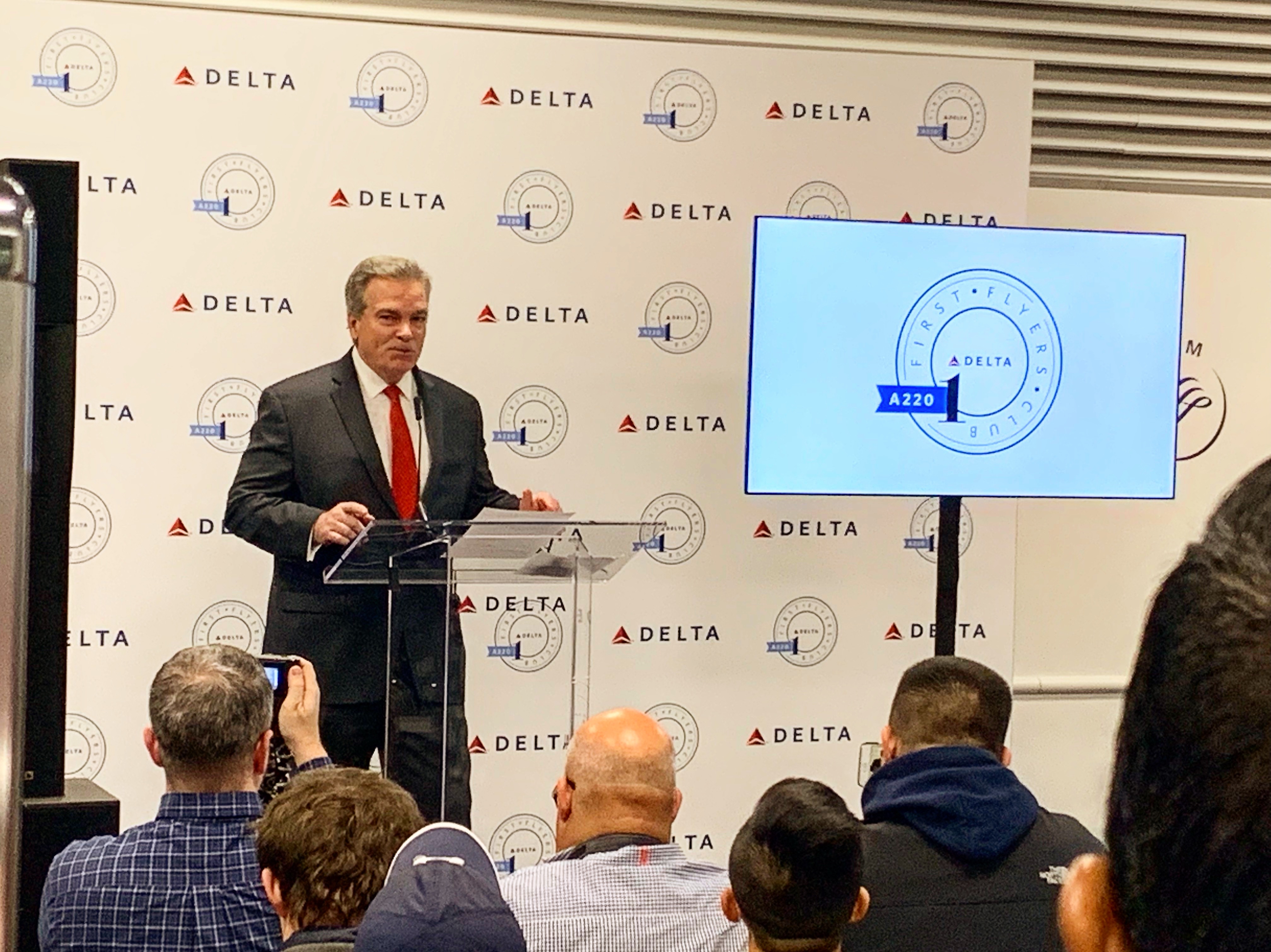 The Airbus was obviously brand new, as this was it’s first revenue flight, despite undergoing pilot and crew testing for a few months. The interior and aisle and ceiling height felt like a A320 or 737, not like a cramped CRJ or Embraer. While seating was 2-3, which is one more than those jets but one less than the usual 3-3 on the A320 or 737, the feel was that of a largier, airier plane. No ducking or bumping into overhead bins. 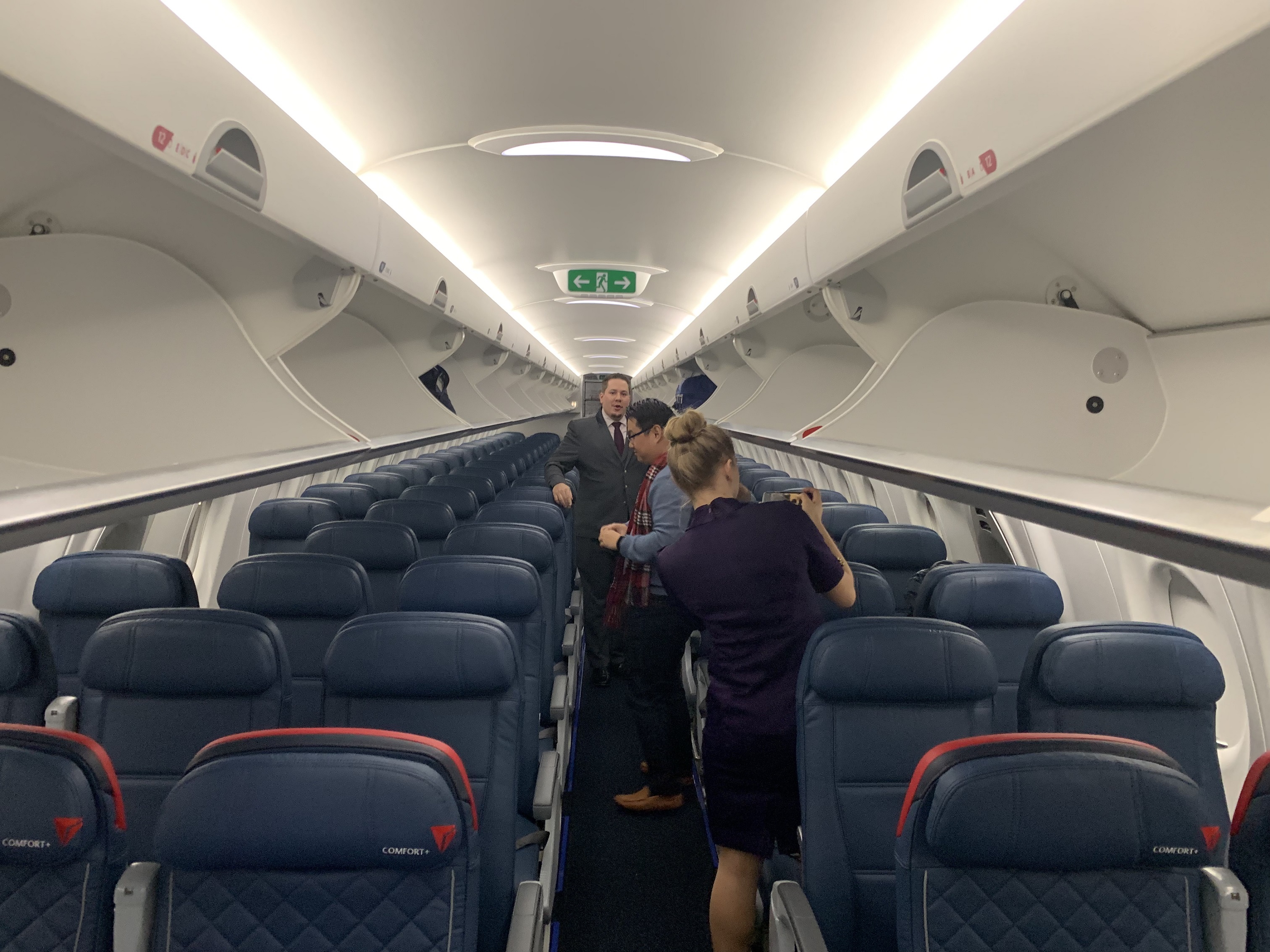 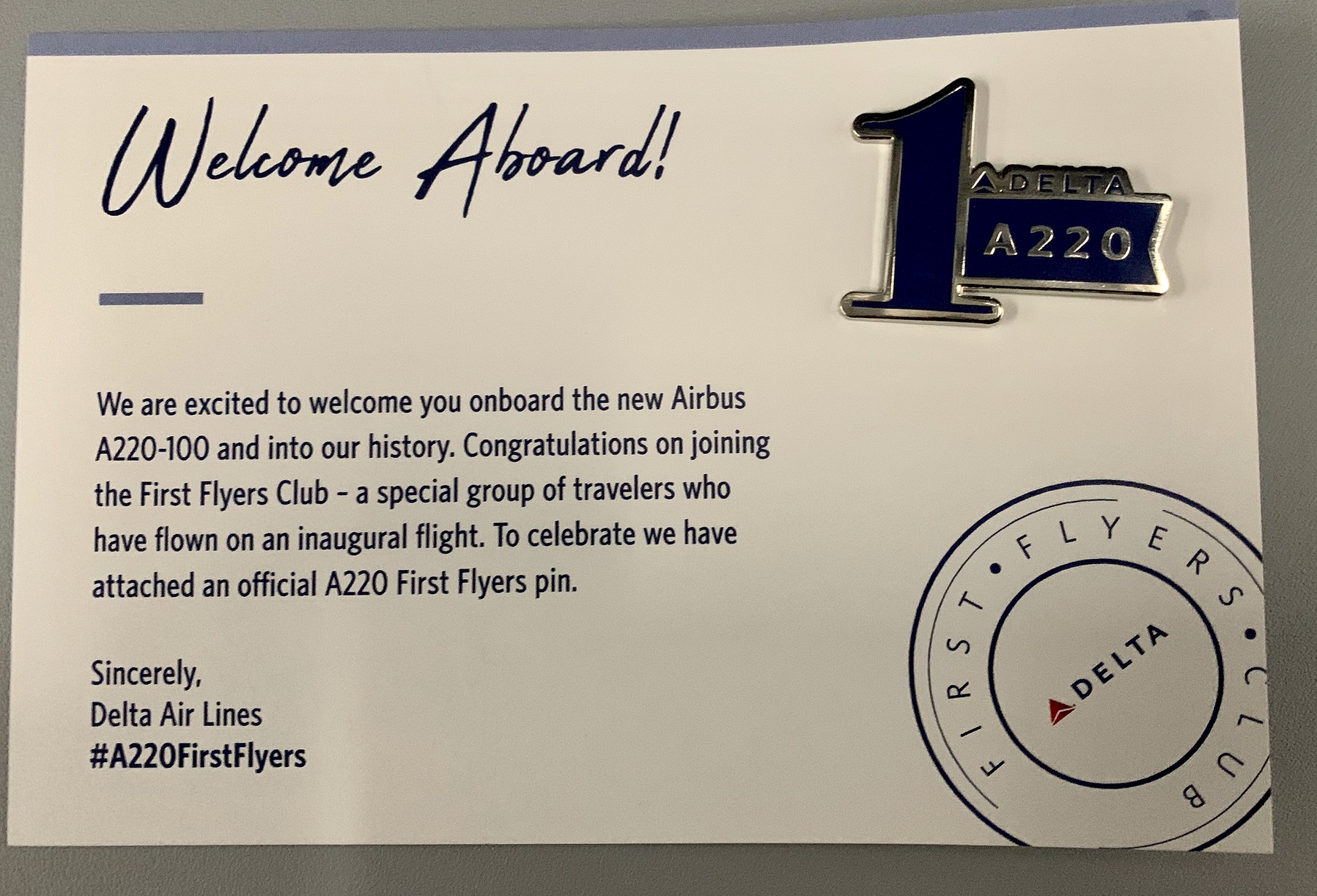 The windows were larger than most narrowbody planes but these are not definitely not the huge electroluminescent windows from the Dreamliner. Still, it’s nice to be able to see more and not have to move your head so much. The seats in coach were wider than any narrowbody I had ever been on; even though the plane will be used for shorter flights, it’s nice not to feel squished in. Every seat featured Delta’s new IFE system, which is wireless and doesn’t need any equipment under the seat – more footroom for all!. The screen operation and size is similar to the new IFEs on current refurbished Delta aircraft. One nice touch was the airshow, which included a pilot’s cockpit & gauge view, which was really cool. 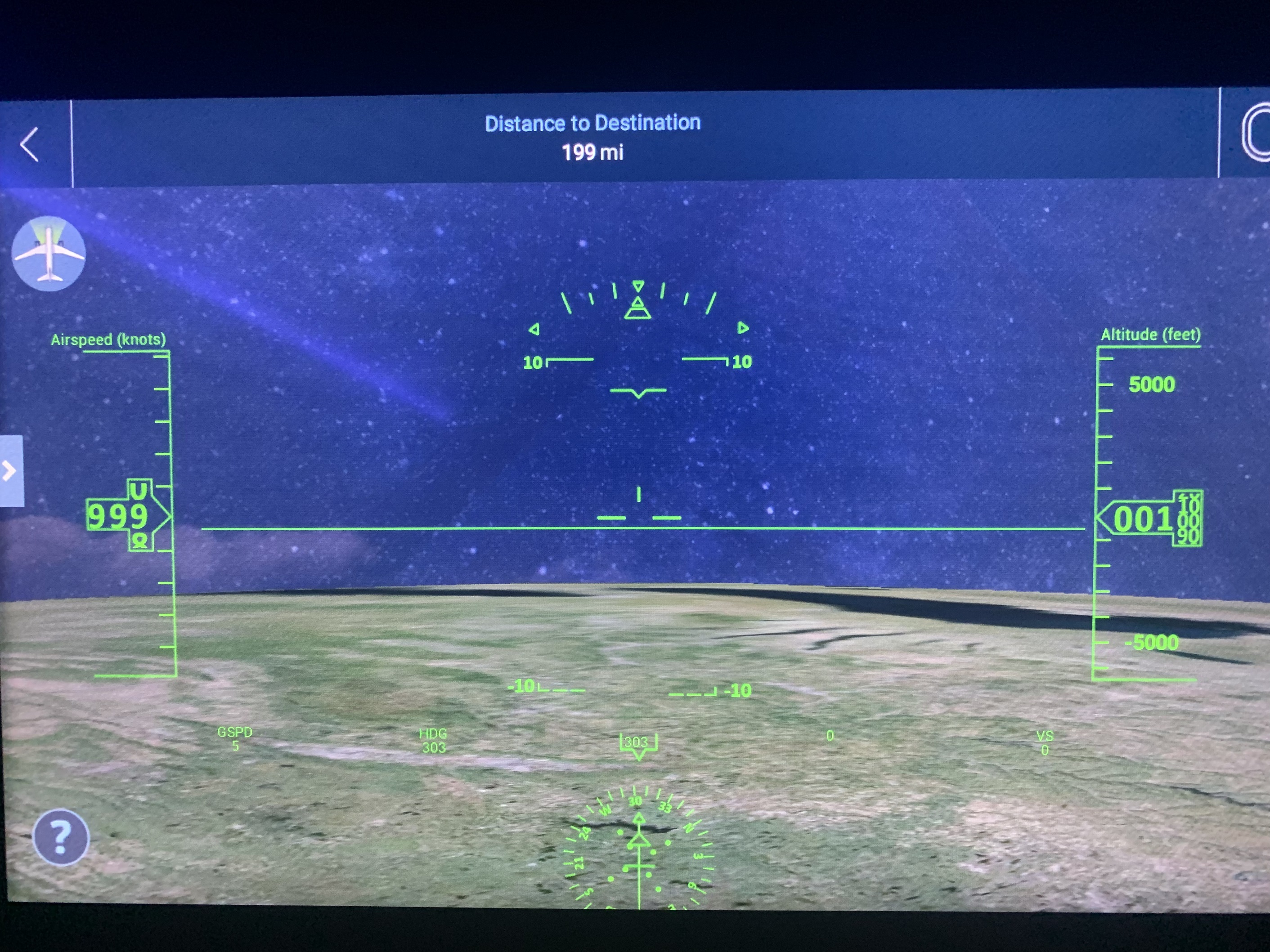 The most noticeable thing about the plane, other than being brand new, was how quiet it was. Takeoff was QUIET – rivaling the A380. You feel a push and you feel speed increasing, but there is next to no takeoff roar. I was sitting near some guys from Pratt and Whitney (the engine manufacturer) and they cheered after takeoff – along with nearly everyone commenting on how quiet the plane was. Once flying, it’s a quiet ride, but not as notably silent as a big, new jet. Quieter than any regional or mid-range plane for sure. 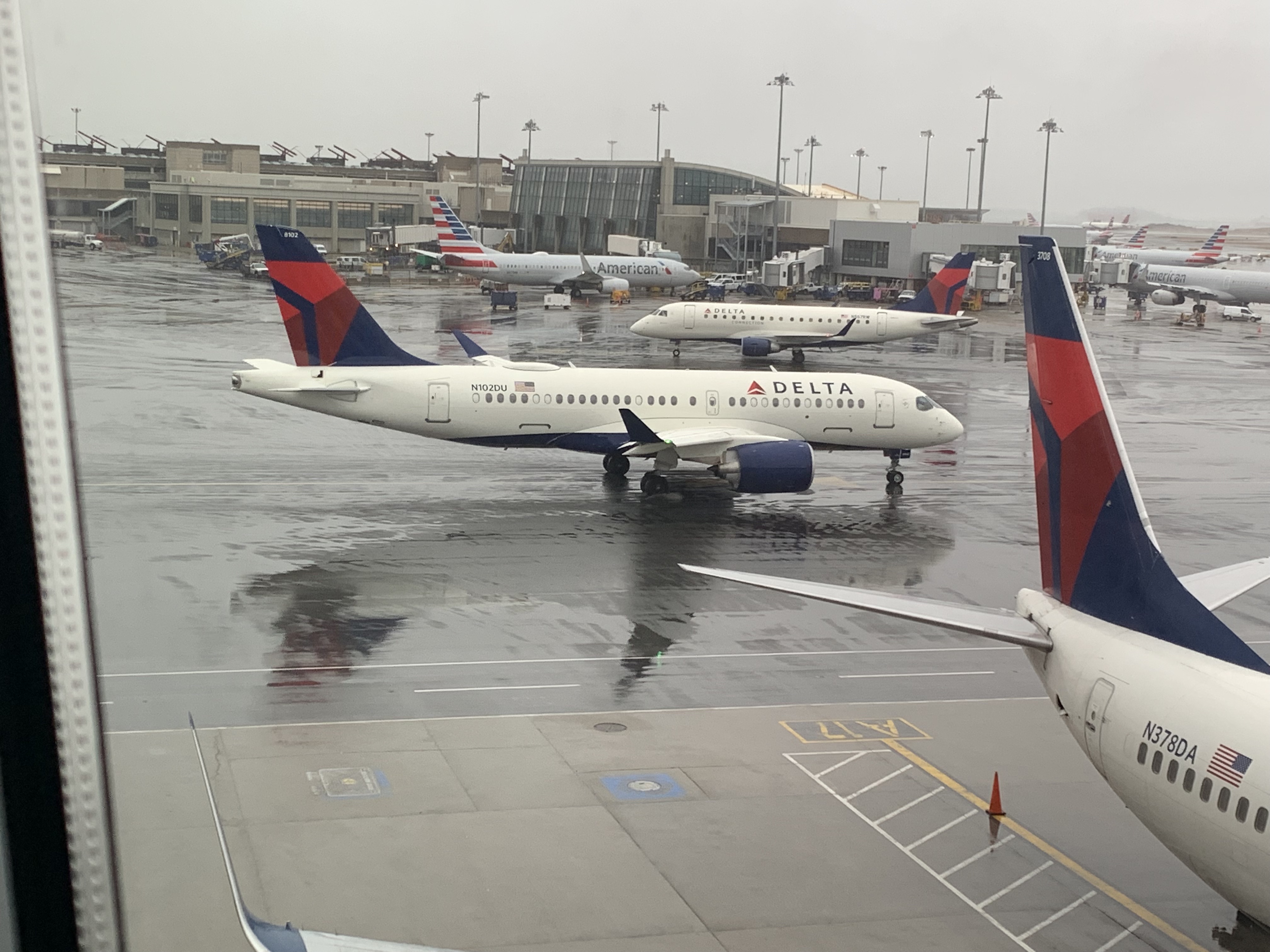 Landing in Boston amidst cheering, most people deplaned but a lot of passengers stayed to talk to the pilots and crew, who were all really friendly, helpful, and informative. It seemed everyone had a great time and was really excited about the new A220. I flew back to LGA in business instead of coach, just to check out the front cabin. The larger seats feature a new water bottle storage area, and are a clean, attractive design. All seats in all cabins have outlets and USB ports, which is unlike the CRJ and Embraer aircraft. 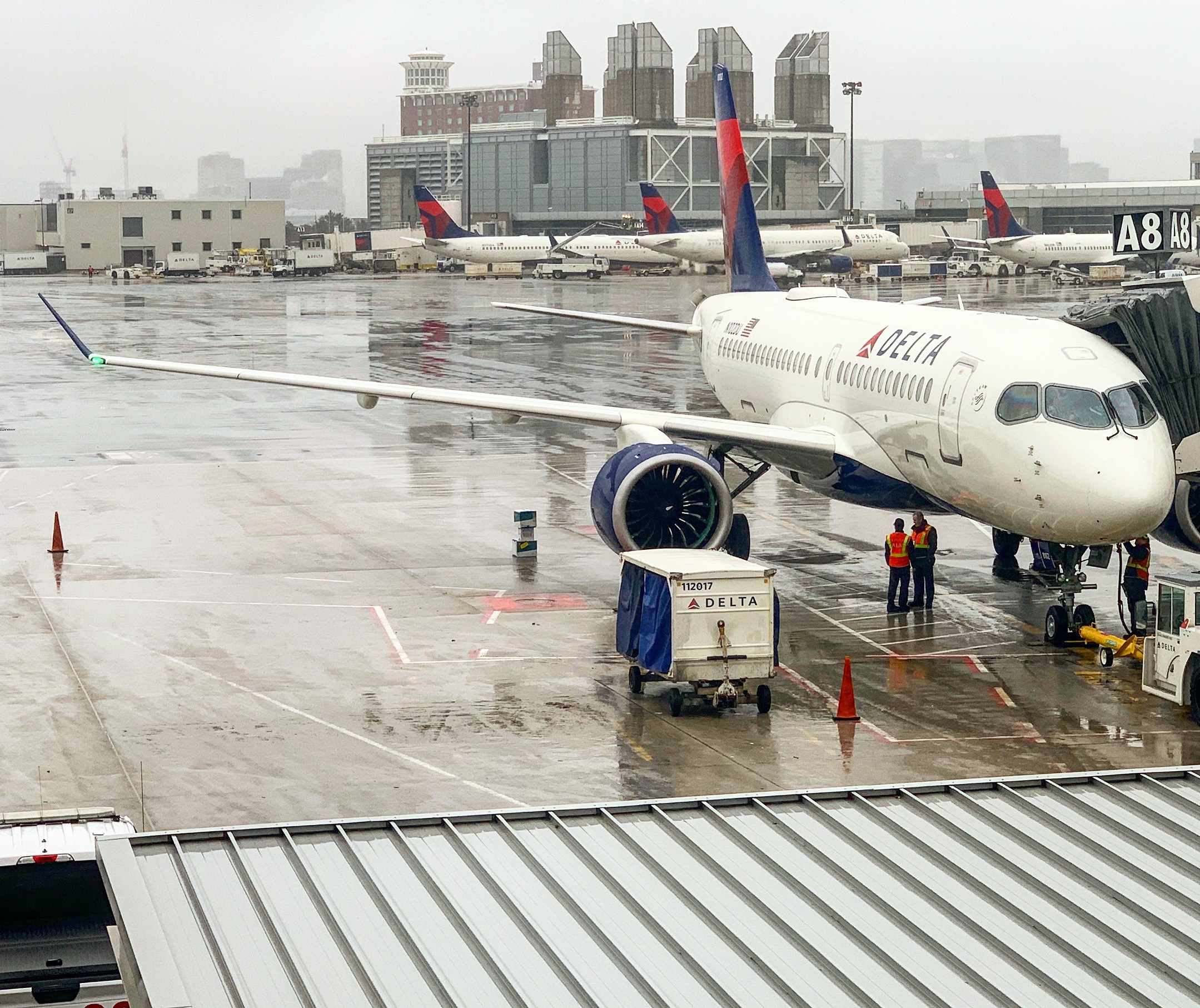 The new A220 will be a great addition to regional flying – it’s a much improved aircraft than what is currently flying. There isn’t one frequent flyer who is excited when a CRJ is parked at their gate – now, we can look forward to a much better short range flying experience.