All of the engines on the Titanic delivered around 46,000 horsepower combined. Just one of the GE units on the 777 puts out over 111,000 horsepower

During certification testing in 2002, the GE90-115B engine (777-300) set a world-record 127,900 lbs. of thrust. The GE90-115B ran for approximately 60 hours at triple red-line conditions (max fan speed, core speed and exhaust gas temperature) to evaluate the engine at its operational limits and demonstrate its capability beyond the most extreme operating conditions

The 777 was named winner of the prestigious Robert J. Collier Trophy by the U.S. National Aeronautic Association, which honored the Boeing 777 as the top aeronautical achievement of 1995

Boeing engineers designed and electronically pre-assembled the 777 using computers. New laboratory facilities enabled the various airplane systems to be tested together as a single integrated entity in simulated flight conditions, before the first jetliner took to the air

The 777’s landing gear is the largest ever in a commercial jetliner. With six wheels on each main landing gear, and two wheels on the nose gear, it has an unmistakable footprint

The Fédération Aéronautique Internationale recognized the Boeing 777 in April 1997 for achieving a speed and distance record for airplanes in its size and class. The 777 set the “Great Circle Distance Without Landing” record, traveling 10,823 nautical miles (20,044 kilometers or 12,455 miles), and it set the record for “Speed Around the World, Eastbound,” traveling at an average speed of 553 mph (889 kilometers per hour)

On May 30, 1995, the 777 became the first airplane in aviation history to earn U.S. Federal Aviation Administration (FAA) approval to fly extended-range twin-engine operations (ETOPS) at entry into service. On that date, the FAA awarded the Pratt & Whitney-powered Boeing 777, 180-minute ETOPS

The flight control system for the 777 airplane is different from those on other Boeing airplane designs. Rather than have the airplane rely on cables to move the ailerons, elevator, and rudder, Boeing designed the 777 with fly-by-wire technology. As a result, the 777 uses wires to carry electrical signals from the pilot control wheel, column, and pedals to a primary flight computer

For engine testing, birds weighing up to 8 lbs. were launched into the engines & a rainstorm with 80 inches of rain per hour was created

The Boeing 777 is manufactured in Everett, Washington – the plant is so large that it requires its own fire department, security force, fully equipped medical clinic, electrical substations and water-treatment plant. The site’s main assembly building, which the Guinness Book of World Records acknowledges as the largest building in the world by volume, its footprint covers 98.3 acres

United was the launch customer for the 777 project

Cathay Pacific was the launch customer for the 777-300 project

During takeoff, the 777’s engines push 2 million cubic feet of air per minute. That’s enough air to keep a human breathing for 44 days 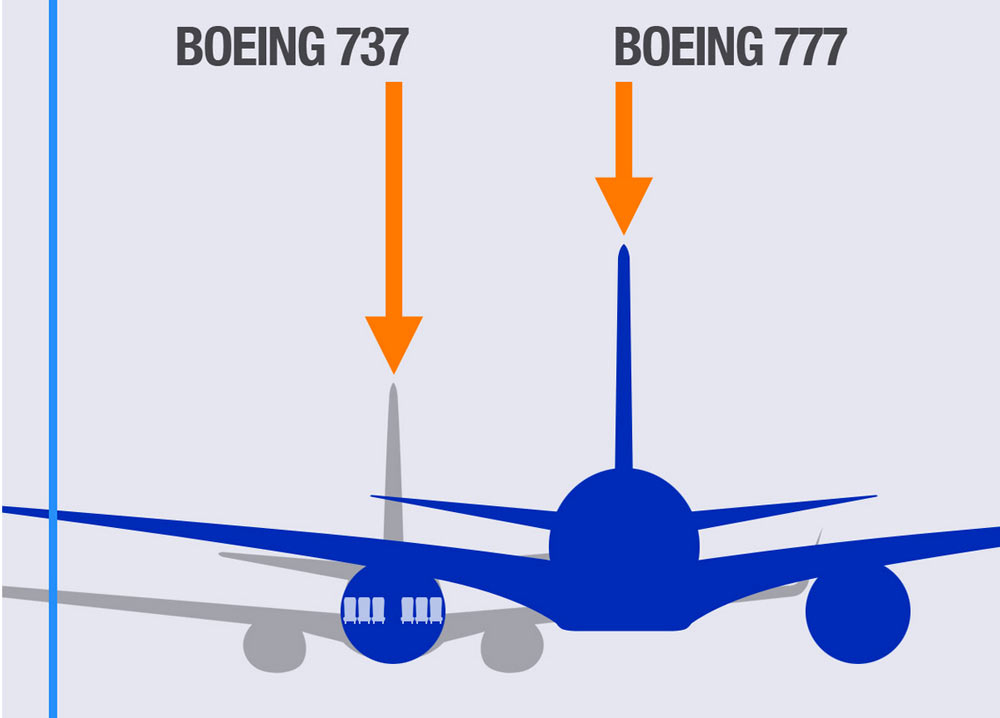