There was a lot of noise on social media and deal sites promoting Aeromexico’s business class round-trip fares between New York City and Mexico City. These deals were a solid value at around $600, which is about half the normal price. Aeromexico flies a 787 Dreamliner once a day in each direction on this route, so I used ITA Matrix to find the round-trip flights in business-class on this particular plane (They have other flights using 737s and Delta’s 757s). Surprisingly, the pricing was coming up as $406! (Note : you had to buy through Orbitz, this price was NOT coming up on Delta.com nor Aeromexico.com).

This is a fantastic deal for round-trip business class to Mexico City. As I’m trying to maintain Diamond Status with Delta in 2020, I credited the miles to my SkyMiles account. The most challenging part of getting Diamond Status is attaining $15,000 MQDs (Medallion Qualification Dollars); Delta wants you to spend real money on tickets, and has increased the Amex Credit Card spend waiver to $250,000, which is unattainable for me (previously $25,000 in Amex spend got you the MQD waiver).

Delta’s Tier 1 partners, which Aeromexico is one of, accumulate mileage differently than a regular Delta flight. For MQDs, use the distance flown and a multiplier, which for most business class fares is 40%. So for Aeromexico flights, bought through Aeromexico and operated on Aeromexico metal, what you actually spend in dollars doesn’t matter for MQDs. For a round-trip flight to Mexico City, the distance is 4,080 miles; multiply that by 40% to get 1,632 MQDs. (Note : MQMs and SkyMiles also work like this; different fare classes have different multipliers). 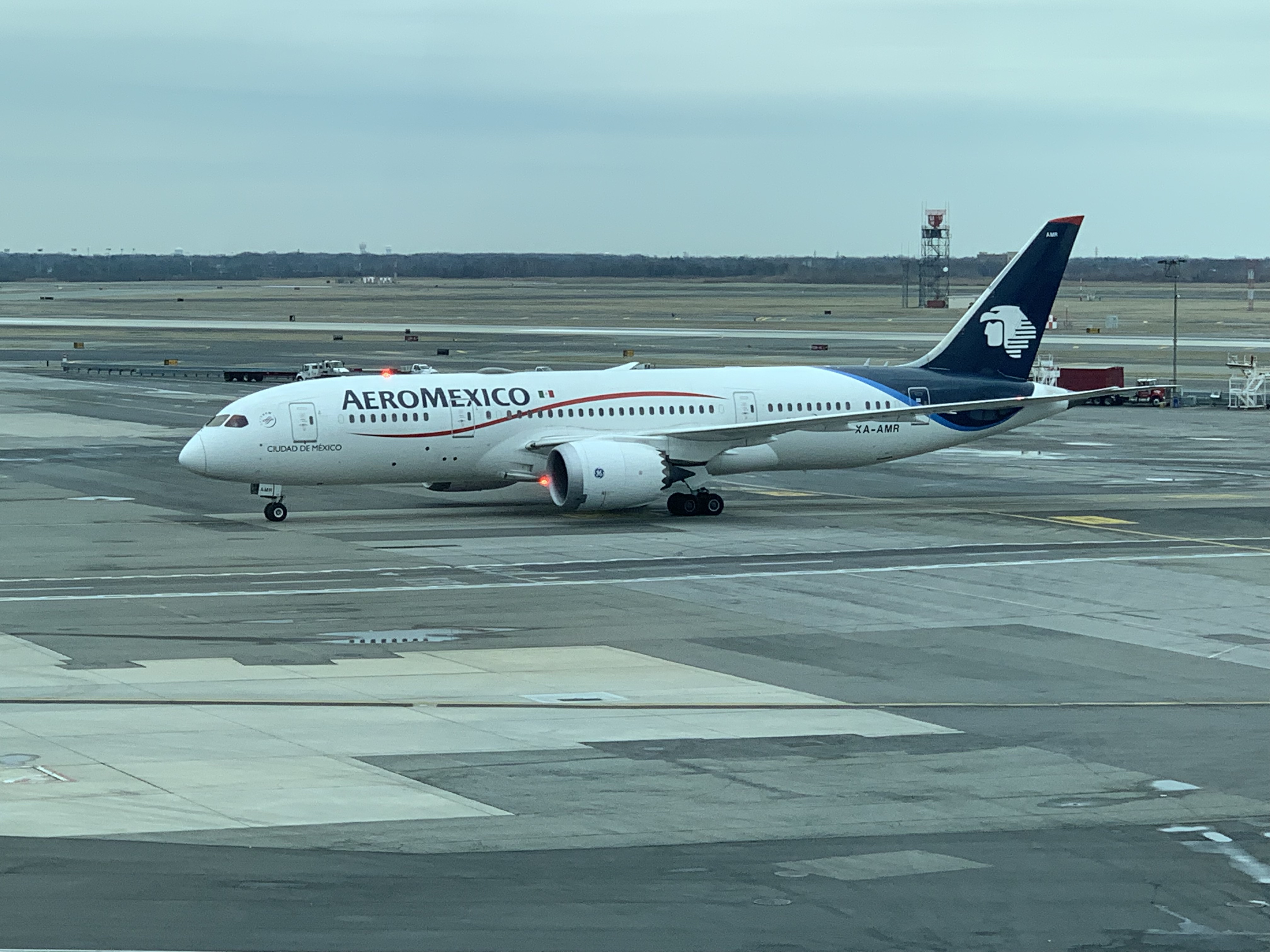 Aeromexico uses Terminal 4 at JFK. The huge terminal is where nearly all Delta flights depart and arrive; a few international carriers utilize this building also. In 2018, Delta increased its investment in Aeromexico, and the infiltration of Delta’s operational know-how is beginning to be visible on the Mexican carrier. The boarding process used to be chaotic; now it’s just slightly unorganized. Compared to my last flight on AM to Mexico City (in early 2018), there was more signage for queing up and slightly clearer boarding alerts. Still, the airline should make more announcements and utilize the overhead screens to show which zone is being called.

The flight wasn’t full, and the terminal itself wasn’t busy. This is probably more related to winter weather and the government shutdown than to Aeromexico or Delta. I’ve seen T4 absolutely packed; the crowding also varies if you have any of the international flights on A380s coming in, which flood the terminal.I have both TSA PreCheck and CLEAR, and there was no line for either. I breezed through security and headed for the T4 Delta SkyClub, which you can access as a SkyTeam Elite member (Gold, Platinum, or Diamond Status) on a coach ticket or with any SkyTeam business class ticket. You can also access this club with the Delta Reserve Amex card. Delta has slowly been improving this club with better food options, upgraded seating, and additional features. Today, there were serving complimentary Pierre Herme macarons, which were really good. Never say no to a macaron.

As a business class passenger, I boarded with Zone 1. There was a friendly flight attendant at the cabin door helping passengers find their seats. My seat, 4A, was stocked with headphones, a blanket, and a pillow. All of these items were upgraded since my last flight a year ago (same route, same aircraft), suggesting that AM is investing in their product. The 787-8 uses a 2-2-2 layout with lie-flat seats; unfortunately, not everyone has aisle access. AM also has 787-9 aircraft, which have newer seats with a reverse herringbone layout, which gives each passenger aisle access and more privacy.

As the cabin filled up (every seat in business class was eventually taken), flight attendants came by with a choice of champagne (Jacques Brut, pretty good!), orange juice, or water. This service has been inconsistent on past flights. The cabin is still new and in great shape (as it should be on the recently acquired Dreamliners), and was well maintained and clean. However, the outside of the window was really scratched up, which made pictures difficult. One of the great features of the 787 are the electrochromic windows that darken with a button instead of with shade. And it’s Avgeek heaven to watch the Dreamliner’s composite wings flex up during takeoff (Fun Fact : the Dreamliner’s wings can flex up to 10 feet during takeoff and flight, and up to a max of 26 feet!). 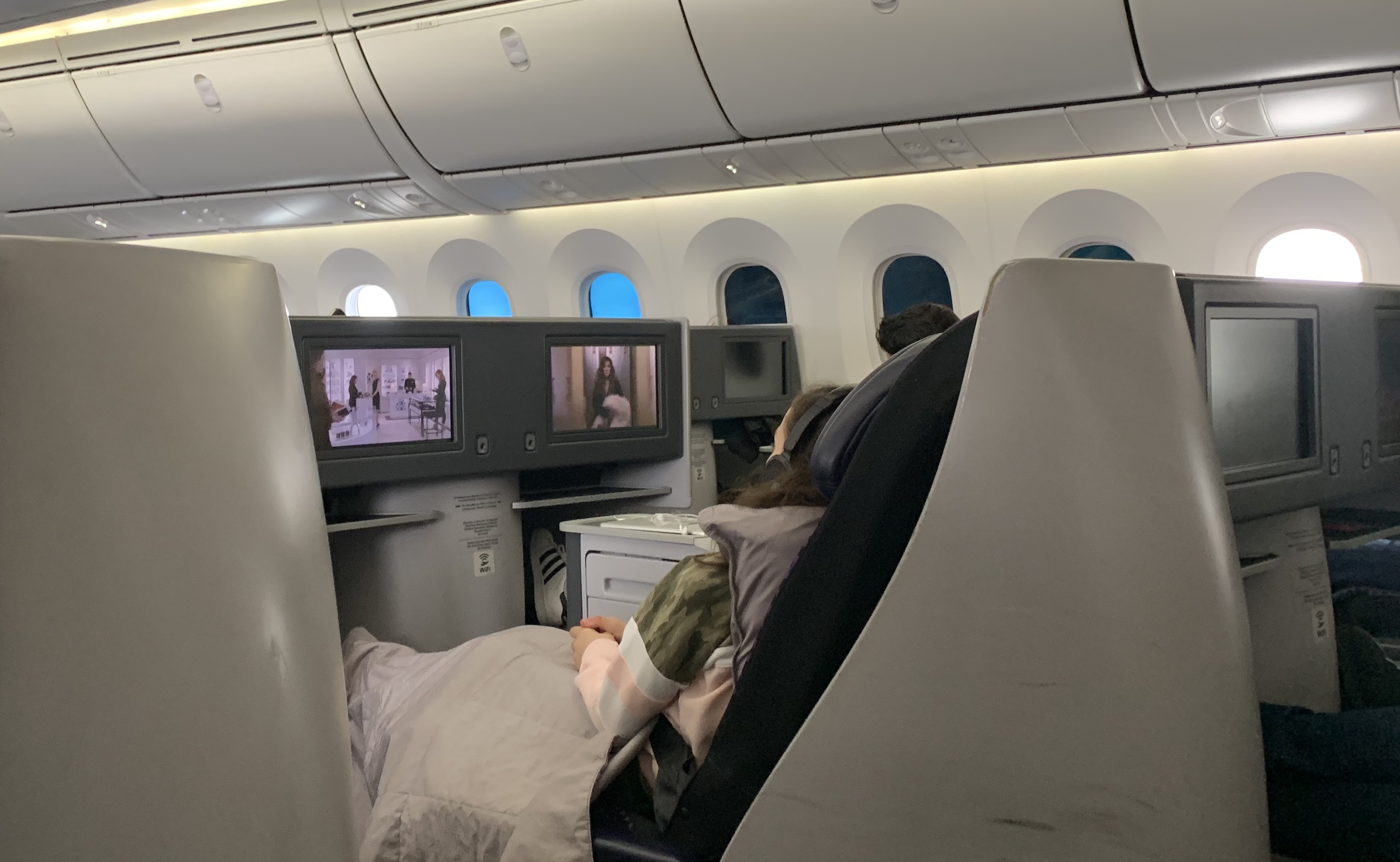 If you haven’t flown a Dreamliner, definitely add it to your list. In addition to the windows, its quieter than most aircraft (my unofficial noise meter says the A350 and 747-8 are slightly quieter and the A380 is the quietest) and you get huge overhead bins, mood lighting, large bathrooms, a galley mini-bar (not on all airlines), and the more humid air that the composite structure allows. I’ve never come off these Dreamliners feeling like I’ve been flying for hours.

About 15 minutes after passing through 10,000 feet, flight attendants gave out menus and came by with a beverage cart. There was two dinner options, along with juices, one champagne, and six wine selections. The flight attendant referenced a sheet for everyone’s name, which has never happened on previous AM flights (nice touch!). They also passed out appetizers (fruit, cheese, and crackers). While it’s a nice business class feature, the crackers were in their original plastic bag – presentation could be better rather than cheese, 5 grapes, and crackers in plastic on a plate.About 15 minutes later they returned with drink refills and your meal selection. I selected the pasta over the fish. It came with a small salad, roll, a strange artichoke appetizer with cheese, and pasta with red sauce. Again, good service was let down by average taste and mediocre presentation. This was essentially the same meal you’d get on most international carriers in coach, but on a plate/tray instead of in the microwavable carton. 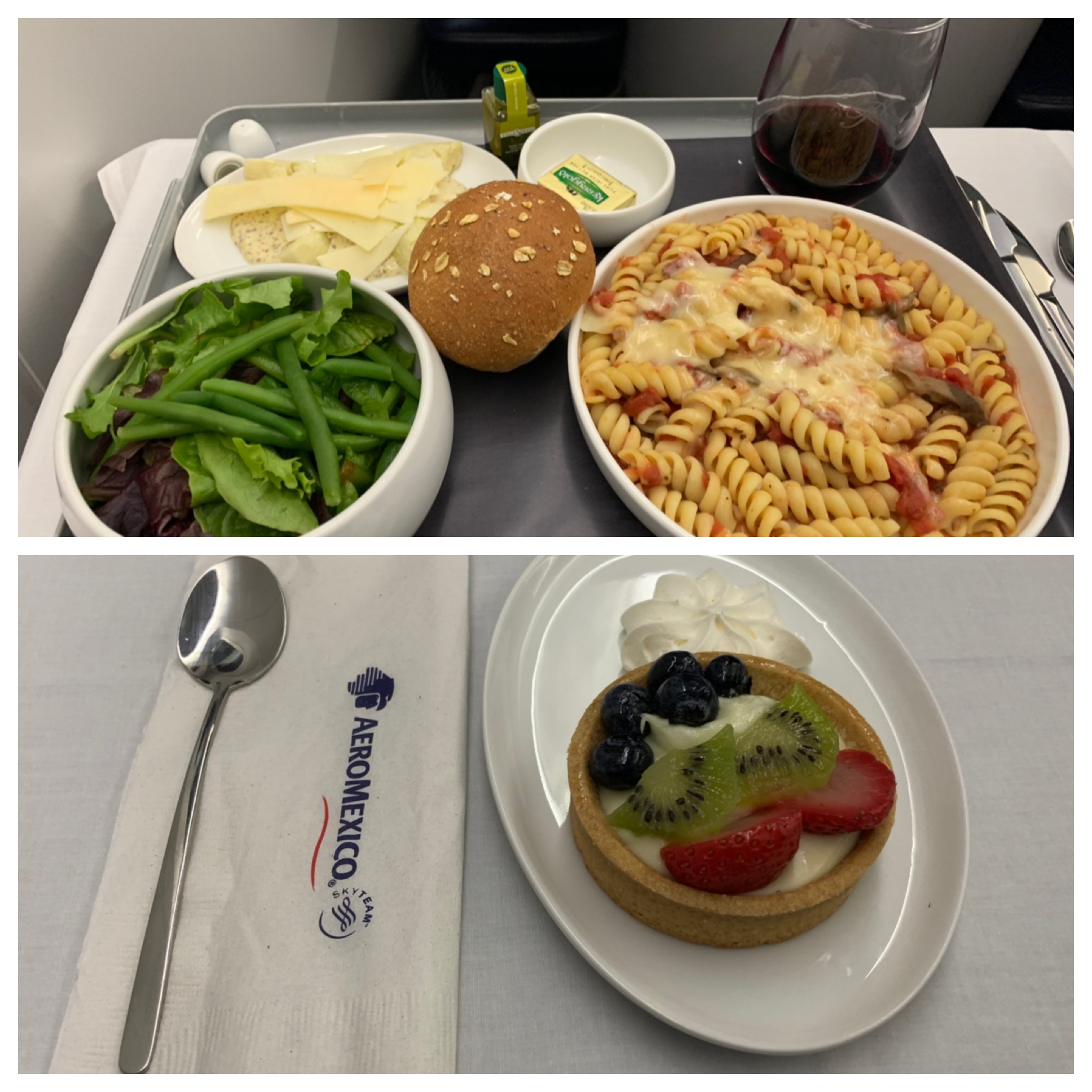 The flight attendants came around once more offering refills, which was an upgrade from the last few AM flights, where they disappeared immediately after dropping off meals.The trays were cleared about 15 mins after I finished, and then the cabin crew ceased to exist. This was pretty par for the course, although now it occurred later in the flight. I would’ve liked a snack service or additional drinks/water. They appeared before landing to collect garbage. On one AM flight in 2018, there was a snack bar set up in the galley; this was nowhere to be found on this flight. 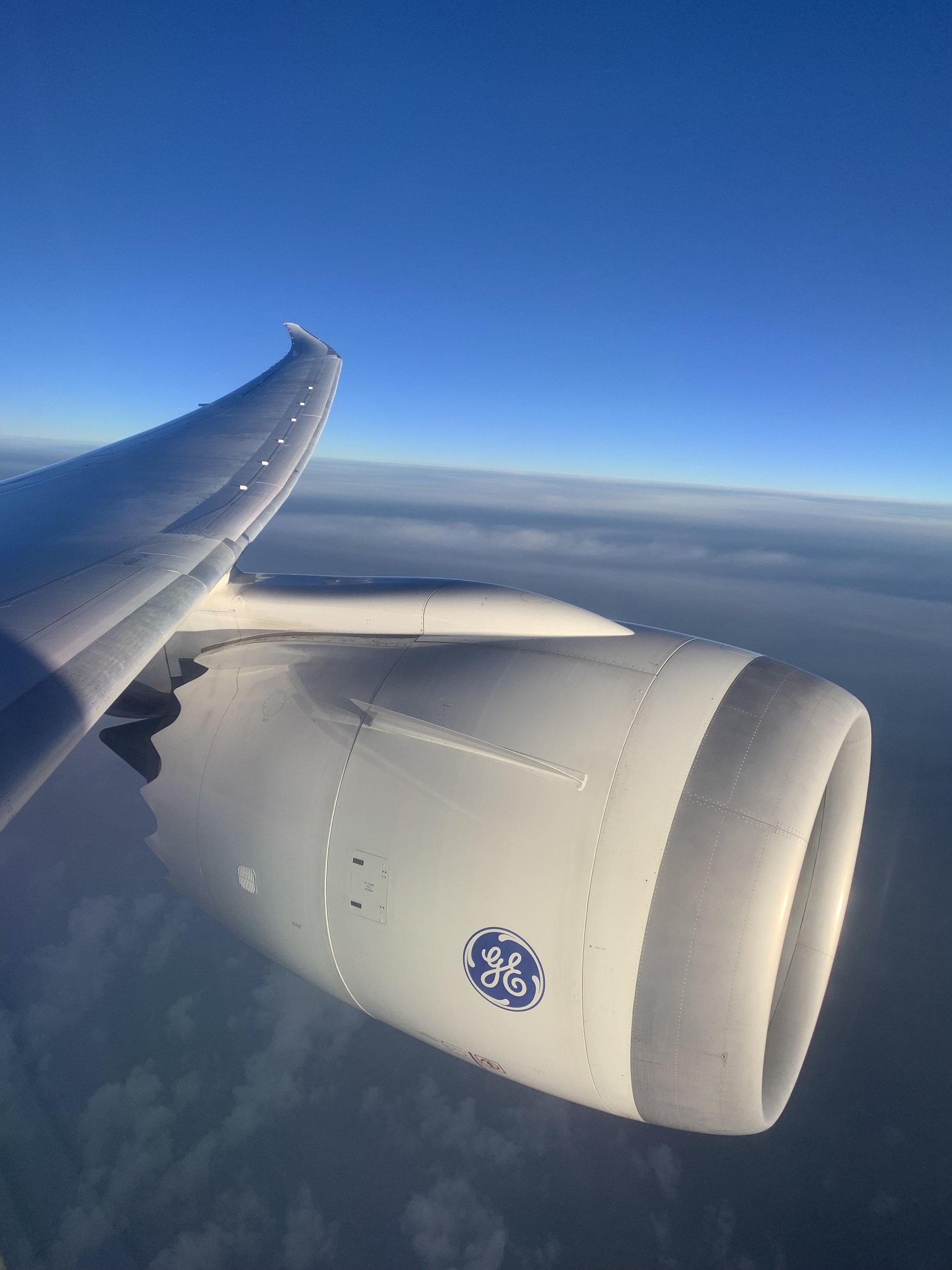 A couple of other minor observations for this flight :

Flying back to JFK on the same 787-8 produced nearly the exact same service with the same meal options. I’m glad to see Aeromexico improving its consistency; in the new year, they will hopefully improve the quality of business class as well as some of their operations, especially on the Mexico City side. 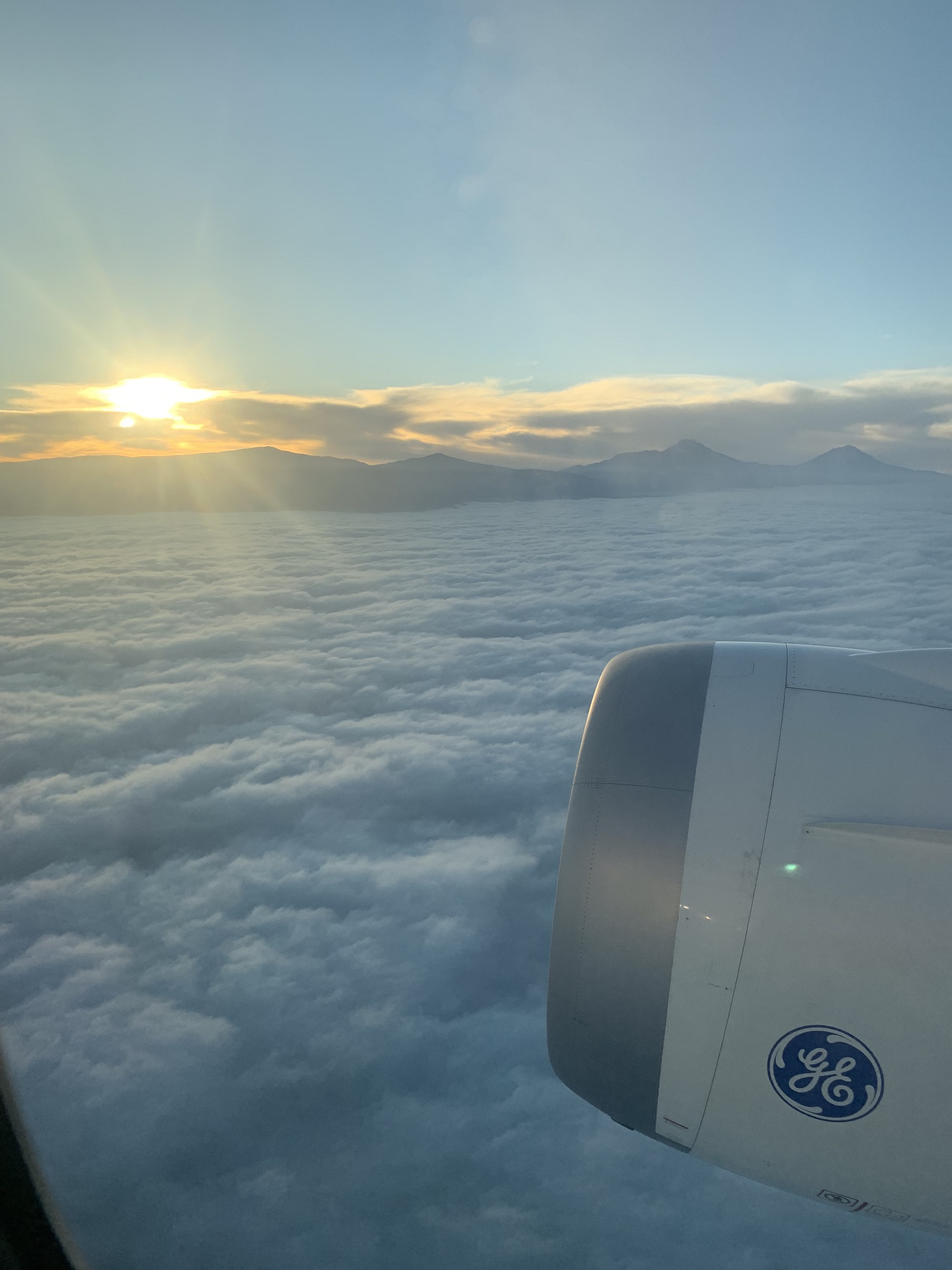 The Dreamliner is a great plane, and customers as well as Avgeeks seem to love it. If you’re considering Aeromexico’s Dreamliner, it’s worth checking for the newer seats on the 787-9. My experience with them last year was significantly better than the 2-2-2 configuration on the 787-8.Overall, this was a good flight on an improving airline, and an excellent value.